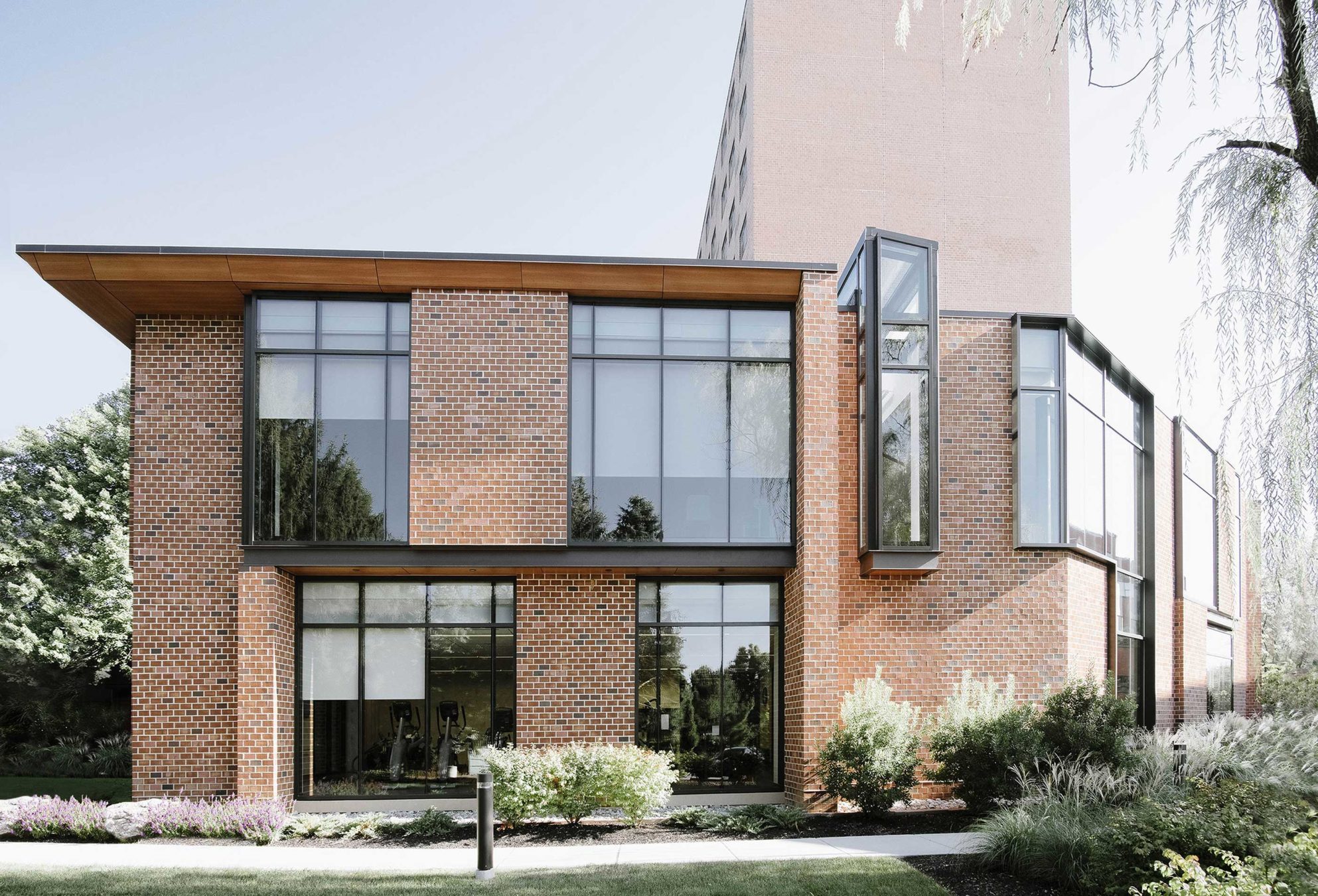 Lutheran Manor Apartments is a non-profit organization that provides an affordable housing community for seniors and those with a qualifying mobility disability. Their mission is for their residents to sustain a healthy quality of life enabling them to remain in their apartments as long as possible independently. The existing building was designed in 1976 as a cost-effective solution for housing seniors. The 196-bed HUD building was mundane in terms of design; its two, 11-story towers had an emphasis…

Lutheran Manor Apartments is a non-profit organization that provides an affordable housing community for seniors and those with a qualifying mobility disability. Their mission is for their residents to sustain a healthy quality of life enabling them to remain in their apartments as long as possible independently. The existing building was designed in 1976 as a cost-effective solution for housing seniors. The 196-bed HUD building was mundane in terms of design; its two, 11-story towers had an emphasis on maximizing residents in the facility, rather than implementing best practices for senior living. Therefore, one of the biggest concerns with the existing space was the lack of social interaction and “life” within the building.

Another primary concern of the Owner was the fear of losing precious green space. Because of this, the Owner was advocating for a multi-story space – similar to the existing towers – with a small site footprint. As part of the early design process, the SFA team researched the aging process and how it could be influenced by design. The team recommended that a biophilic design, one that blurred the division between interior and exterior space, would not only alleviate the concerns about the loss of green space, but also reinforce the idea of wellness among the senior residents. The results from our research empowered the Owner to shift the project scope needed from an anticipated HUD-level design, on par with the existing building, into a more complex project that addressed the idea of wellness on a broad scale: truly enabling the wellness of residents’ bodies, minds, and spirits.

It was determined that a two-story addition with a slightly larger site footprint would be better serve residents. Not only would fewer stories break down the scale of the existing structure, but it would also make the space more accessible and increase the chances of interaction between residents using the amenities within the Wellness Center. In keeping with biophilic principles, the two-story structure would also allow for continuous connection to the outdoors, as residents would be able to look out the expansive glass glazing directly onto the strategic landscaping of the trees and outdoor spaces from both levels of the addition.

Inspired by the simplistic gesture of the existing building’s overhang, brick piers, and rhythmic heights of interior shades, the brick panel breakups on the addition’s exterior undulate back and forth from the centerline, creating variety and depth. Windows dance along the façade as vertical elements in a forest of nature. Exposed steel harkens back to the roots of the Lutheran Manor community, as many residents are retired workers from Bethlehem Steel. The use of wood on the underside of the overhangs and canopies creates a respectful softness to mirror the addition’s natural surroundings.

To address concerns about the negative impact on outdoor space, the SFA team was careful to ensure the addition interacted with the site in a way that leveraged the outdoor space available. A carefully planned landscaping and walking path allows residents to engage internally and externally. One of the site challenges was its gentle decline, which required important considerations to achieve a continuous connection from the Wellness Center to the walking path, resident gardens, and outdoor gathering spaces. To maintain accessibility and connection, these elevation changes were addressed internally within the addition. While the amount of green space technically decreased with the addition of the new structure on the site, it actually feels like there is more green space. The space that is there is better planned, and therefore, better utilized.

In addition to the size, massing, and footprint of the building, SFA’s research on aging similarly impacted the building’s aesthetics, materials, and programming. Not surprisingly, the team found that the health of seniors who remained isolated in their rooms declined more rapidly than those who had daily interaction. Biophilic design recognizes that, as a social species, the connections between humans are equally important as our connections to nature. Things as simple as speaking out loud to another person, looking out the window to views of nature, and breathing in fresh air all play an important role in keeping the mind stimulated and slowing the aging process. Therefore, the team felt it essential to conduct surveys with residents to give them a voice in the design of the new space and understand the ways they would prefer to interact.

Within the interior of the building, biophilic design is also on full display. Rather than simply placing plants in spaces otherwise disconnected from nature, the team utilized transparency and materiality to bring the outdoors in. Full-height glazing frames continuous views of the site and achieves an expansive extension of the space. Natural filtering of this light bleeds into secondary spaces as interior glazed walls borrow light from exterior boundaries. A light-filled, open stairwell encourages human-powered ascension through the space, as opposed to the use of the vertical lift system. The harmonious continuation of exterior materials penetrating the interiors break down the boundaries; for example: the warmth of the wood on the exterior overhangs continues through to the entry lobby, where the same material makes up the built-in benches and surrounds the living wall.

Interior programming includes a fitness center with inclusive pneumatic equipment, poured cushion sports floor and a walking track with a full-time fitness specialist; an exercise room for group fitness classes; a salon providing health and beauty care, such as massages and facials; a multi-purpose room that encourages interaction through gaming, including table games, shuffle board, darts, and Wii video games; a laundry room with bench seating and tables for social interaction; a community room, used for multiple religious services, educational lectures, movie showings, and social engagements; and an alter and chapel for meditation and spiritual reflection.

The religious spaces are of particular importance to the client because of their strong ties to the Lutheran church. The clerestory denotes the internal spiritual area as it slices through the building, opening itself up to the natural and divine worlds. This space is particularly stunning, as a beautifully orchestrated operable stained-glass wall, custom designed in the spirit of giving, is naturally back lit during the day as the sun rays pierce the clerestory. This piece of art spiritually uplifts the altar as if opening up the heavens above.

To stimulate the desire to participate in all of these activities – provided to residents by Lutheran Manor at no additional cost – SFA designers created “glass interior storefronts” to create visual queuing of activities as one casually observes from the corridors or other program spaces. Built-in bench seating – something that originally only existed in a cramped area near the elevators – is now consciously and continuously placed throughout the addition to allow residents to engage, regardless of their participation level, while they observe the living vegetation wall or salt-water fish tank.