While conducting research on context and materials, we came to use the phrase “Ornament and Grime.” The phrase is a hack of the famous Adolph Loos manifesto “Ornament and Crime,” first delivered in his January 21, 1910 lecture in Vienna. Ornament and Grime (O+G) became the wordmark for Spillman Farmer’s investigations into post-industrial contexts and the “marks of time” as related to the aesthetic and technical lifespan of buildings. This blog will look at just one aspect of this thinking: the post-industrial context.

The true catalyst of our O+G research was found in scholarship from Ben Campkin, of London’s Bartlett School of Architecture. Campkin’s “ Ornament From Grime: David Adjaye’s Dirty House, the Architectural ‘Aesthetic of Recyclying’ and the Gritty Brits,” became a starting point for our Partnership for Innovation (Pi) project. We began to question the aging process of buildings, and the way our architecture might address the long-term material impacts of age. Pi, fully entrenched in a post-industrial fabric, was a critical juncture for the development of a new approach to the building/context relationship. 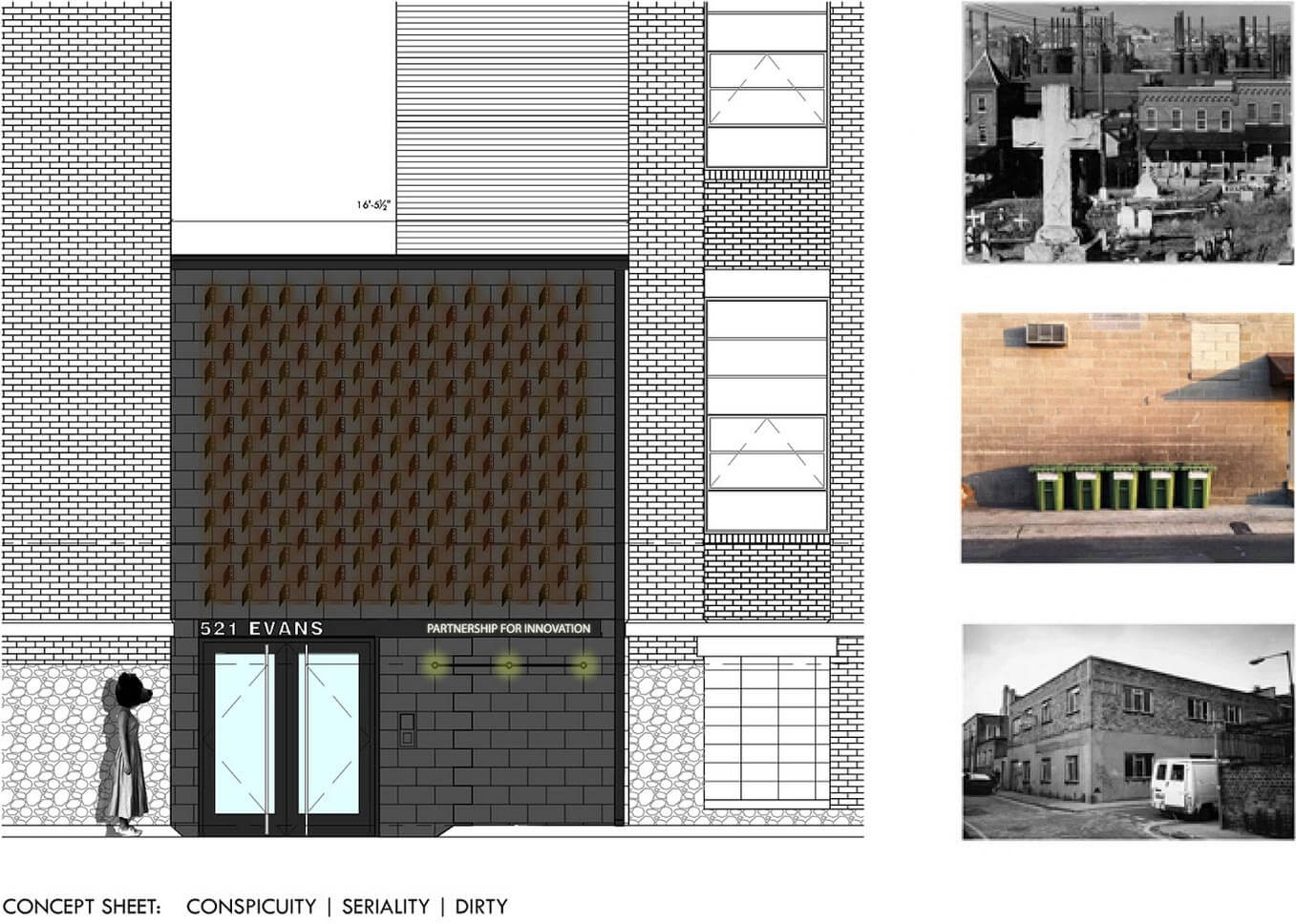 We set off to maintain and leverage the rough, back-alley context of the project. Rather than sanitize our approach, we chose to embrace the grit and history of the existing building. Pi, a technology incubator developed and run by the City of Bethlehem, recycles an existing loading dock as its new entry. Tagging or marking the entry in an appropriate way was of paramount concern for both the historical review board and for the project’s public image. Our approach was born of the local context, drawing inspiration from the industrial heritage of the neighborhood just beyond Pi’s front door and the need to respect a tight budget without sacrificing design solutions.

The new entry faces the City’s recently-developed Greenway, creating a highly-visible face for Pi along the district’s main artery. In reference to the Greenway’s former use as a railroad, 138 industrial-issue reflective flags were installed in an array across the entire façade. While the rest of the alley is marked by dumpsters and other “back of house” fixtures, Pi’s façade addresses the industrial vernacular and elevates it with modest rough elegance. The conspicuity array marks entry, signals transition, and promotes pedestrian safety for doors that open immediately onto a tight street. The array augments the “gritty” architecture of its industrial building, and acts as a visual cue for vehicular and pedestrian travelers along a narrow but important urban corridor.

Campkin writes of Adjaye’s Dirty House, saying, “Rather than celebrate the industrial as ruin or quasi-ruin, the anti-fly posting coating both signals that the building is ‘new,’ and that its current phase takes precedence over any fussy preservation of it’s past.” Pi leverages the contextually-sensitive principles of conspicuity, seriality, and dirty that are found throughout the transitioning neighborhood to create a place that is respectful of its heritage but lacking the anchor of knee-jerk nostalgia for Bethlehem’s industrial heritage.

Special thanks to the City of Bethlehem team for their continued vision and pursuit of creating a vibrant post-industrial neighborhood in South Bethlehem, the former home of the Bethlehem Steel: Mayor Callahan, Joe Kelly, Tony Hanna, Irene Woodward and Rebekah Rusnock.

A big thanks to Kate Carter who co-authored this blog and provided a fantastic image as well.

Our interest in materials, placemaking, and positively impacting the human experience through design led to the idea of curious explorations: our ventures into design/build, furniture design, and material research.

Spillman Farmer Design Principal Joseph N. Biondo was born in Bethlehem, Pennsylvania and graduated from the Kansas State University College of Architecture, Planning and Design. Shortly after graduation, he pursued a lengthy career with Bohlin Cywinski Jackson Architects, where he worked closely with AIA Gold Medal recipient Peter Bohlin. In 1996, he established Joseph N. Biondo Architects, before joining Spillman Farmer Architects in 2003, where he is currently bringing design excellence to the forefront.

Higher Education During the Pandemic and Beyond

Living in the Brownfield – Carbon Copy

Read article
In the Making